Below are fresh data, rates and markets, the Fed’s lions tigers and bears, a word on infrastructure, Covid, and then... then the stuff we don’t want to talk about.

New Data. The big reports for April come next week, but some glimmers this week.

Misrepresented by headlines in all media: first quarter GDP fell by 1.4% in the first estimate, reported with various degrees of shrieking “Recession!” When you’ve sold your soul to attract attention, it makes it hard for the mob to know when to panic, although if it does go badly today’s mobs have pre-decided whom to blame.

Through March the economy was still just fine, even hot. The decline in GDP came from oddities: inventory bloat in Q4 2021 shrank in Q1, supply chains lurching. Exports fell and imports rose, also a subtraction. The only authentic downward force was the decline in government spending.

The real economy in any quarter is Personal Consumption Expenditure (PCE), in Q1 an annualized 2.7% gain. Personal income is growing at only half the rate of spending, propped by borrowing and assets, but that’s a routine differential in an economy with forward momentum.

The companion PCE inflation measure is the Fed’s favorite, and headlines again lied. It’s silly now to report inflation in the year past; the important thing is the trend going forward. The screech: “6.8% Inflation!” But in March the actual core rate was only 0.3%, half the rate of last year. Wages are rising, but not a self-reinforcing spiral: the broad Employment Cost Index which includes benefits, in the year ending March rose 4.5% -- not accelerating, and in normal times should be higher than inflation (thus “real earnings”).

Rates and Markets. With one exception, markets have been stable for two weeks. Mortgages just north of 5.00%, the 10-year T-note holding below 3.00%, and the Fed-predictive 2-year stuck at 2.75%, the likely year-end level.

Oil is sticking close to $100/bbl, natural gas to $7/mbtu. Europe, Russia, and China are slowing fast, all probably negative GDP, which reduces energy demand, and coal returning. Various embargoes and shutoffs and dislocations can explode the price of either oil or gas.

The US stock market is vulnerable, Lord knows. If a man falling rapidly down stairs and hoisted back up is stable, then so is the Dow back-forth in a staircase 35,300 to 32,600.

The signature not-stable market is China stocks, despite the central bank willing to buy in support, and selling “discouraged” by Party goons. The Shanghai composite from 2020 to last month repeatedly traded over 3700 and this week cratered to 2886. It has recovered a little on Xi’s new call for all-out spending on infrastructure, and his disorderly retreat yesterday from oppression of entrepreneurs. China’s official GDP figures are absurd -- no way to shut down one-third of the place and stay positive, as evidenced by the crashing value of the yuan.

The Fed, Oh My! The Fed meeting next week will conclude on Wednesday. The stabilities in markets in the last weeks have reflected the wait for this meeting. The Fed will take the cost of money from 0.50% to 1.00%, probably signal another 0.50% coming on June 15, then maybe a slower pace but data-dependent. The Fed will for sure announce the extent and means of winding down its $9 trillion holdings of Treasurys and MBS; markets are partially prepared, but the actual decisions will surprise.

Infrastructure. A new lesson on this means of stimulus or job creation has arrived in Pulitzer-quality work at the Denver Post. Its new multi-part story, The Big Payout establishes $65.8 billion in Covid aid hosed into Colorado alone, $10,970 per person, average among the states. The county receiving the most: Pitkin, which is Aspen, double the average. Bound to have been a desperate need, there. Ask most any Colorado citizen where they saw big benefit from the money, and get a blank look. Ask any family of four if they would rather have had a check for $43,880.

Infrastructure decisions should always be made at local levels and with as much local funding as possible, where cost and benefit are linked.

Covid. Two years into Covid, and China’s zero policy is in bad trouble. In the West we did the hard work, we tried everything despite resisters, and more or less did protect the hospital system. And now we are done. Not all of us, but most of us have crossed into... enough, already. Get on with life. Our passage to endemic status may be the only way, and China’s tough years lie ahead.

A US minority still prefers to live in fear, some justified, and the CDC chief will stay in her bunker until removed. But the data tells the tale. This week: the percentage varies by age group, but roughly two-thirds of Americans have had Covid, and a similar overlapping figure have been vaccinated. We don’t know how long immunity will last, but we’ll learn why so many people don’t become infected, or without symptoms, or mildly ill, and so few become terribly ill.

Only Among Friends... It’s not news that after a long period of stability a big change comes as a shock. We evolved to get the bear out of the cave, not to admire its ancestry.

The last negative global shock (non-financial/economic) was 9/11, intense but brief. It led to US entanglement in stupid mini-wars, but our problem and not the world’s. Ten years before, the 1991 Gulf War was fought by a one-time-only UN coalition, short and done. Run the tape farther back, and find deadly crises but momentary (Cuba ’62, Berlin ’61 and ’48), and big but localized and peripheral wars (Vietnam ‘65-’73, Korea ’50-’52).

The last time the world faced peril comparable to today was the 1930s. Most people then saw progression to disaster in real time, the helpless inevitability of slow-motion automobiles on ice.

The Ukraine war is widening. This week saw several strikes into Russia, including a defense research facility outside of Moscow. Russia will reciprocate. The West is committed to winning, Sweden and Finland joining NATO next month. Impossible to confirm, but sources have Russia asking for missile supplies from North Korea in exchange for the design of ICBM warhead re-entry vehicles. China is in deepening internal disarray, both economic and foreign policy, clinging to lose-lose alliance with Russia, the Party incompetent. The previously passive or nearly so are now engaging: Japan, South Korea, and all of Europe except Hungary.

The most recent credible word from Russia: as energy revenue dwindles and sanctions tighten, sometime this summer it will run out of reserves to prop its economy. By then despite thought-control, understanding of losses and lies will have spread. Vladimir gets to die in bed only if he wins in Ukraine, and he can’t.

The US faces an election. The president is elderly beyond functioning, decisions or public leadership, and the Veep is... so sad. On the Right secessionists have bits in their teeth (silly Abbott, dangerous DeSantis), and Progressives can’t progress beyond dreams of the 1960s.

There is not a hell of a lot that citizens can do, except maybe one thing. Put down other priorities, and pay attention to Ukraine. Pull together, and resist those who would pull us apart.

The US 10-year T-note in the last year. Small solace, I know, but two weeks of peace has been nice: 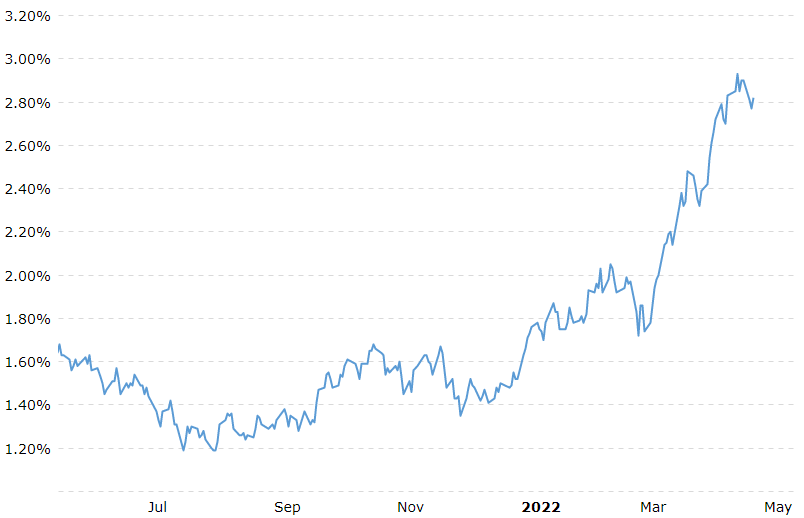 Dear Emperor Xi: your yuan chart indicates devils at home and foreign are not following orders. (BTW: up is down, more yuan required to buy a buck.) 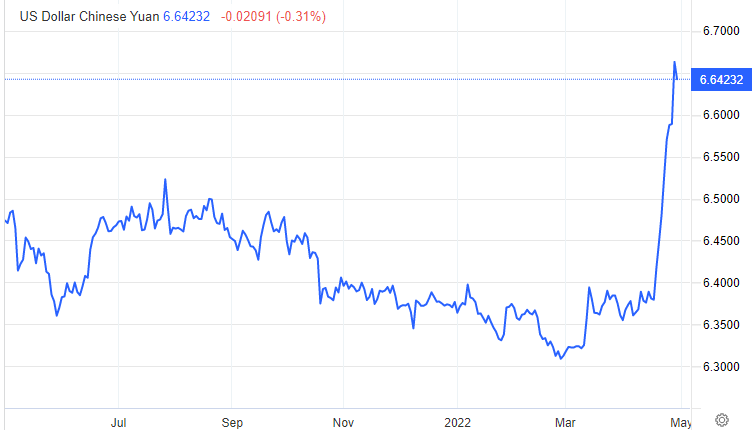 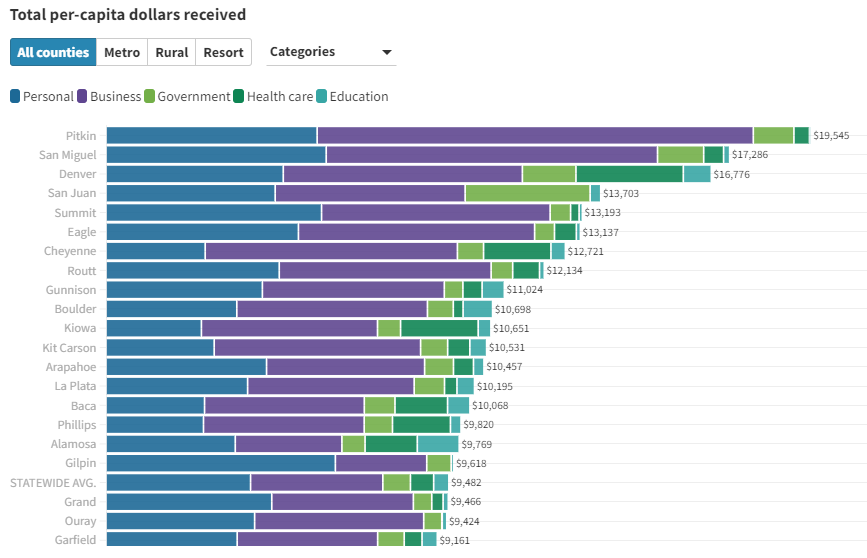 MD, DC, or VA? Which state has the highest and lowest property taxes?