During the last forty-four years, my days have begun and ended with the mortgage market. Four painful moments stand out. Today makes five. (There have been many more good days, but even the Fairy Godmother has her limits.)

Mortgages are covered poorly in financial press, as stocks and such are much more entertaining. Today’s events still unfolding will take days for good coverage. Freddie’s weekly survey will not discover today until next Thursday. But the MBS market is real-time, not like old, sleepy S&L days.

The CPI news this morning was so awful that it changed the bond market’s view of Fed trajectory, and the weakest sector broke. In bond jargon, MBS went “no-bid.” No buyers for MBS. Then a few posted prices beyond borrower demand, not wanting to buy except at penalty prices. Overnight the retail consequence has been a leap from roughly 5.50% to 6.00% for low-fee 30-fixed loans.

The physics of collisions... the second one does the harm. When your car hits a telephone pole, no problem. Then, after a slight lag, trouble comes when you hit the inside of your car. Same thing in football: helmet on helmet is all-okay... until your brain hits the inside of your skull.

The same physics govern housing collisions with mortgages. At the new year mortgages were still three-ish. In February, four. At the end of March, five. May, five-and-a-half. Historically, a two-percentage-point rise from cyclical trough has iced housing, the freeze underway a month ago. Now up by three points, and double January.

The pause in housing between the first collision and second is elongated because of human nature. Someone desperate to buy a house is still desperate, and modestly relieved to buy even at a higher price and rate so long as not forced into an unlimited auction. Now it’s time for Wile E. Coyote in his Acme sneakers, running off into thin air and all okay until he looks down.

Looking down... MBS are such a weird market that other markets have not processed what is happening. Stocks are down 2% today, but would be down a hell of a lot more if considering what a full-stop to housing will mean.

Today’s CPI Trigger. Markets were braced for a bad report, but not this. Overall CPI jumped 1.0% in May. Any thought of deceleration... ka-blooie. CPI 8.6% in the last year, accelerating under pressure from Ukraine energy dislocation.

Many observers this morning say that the CPI news is so lousy that there is no point in looking at the details. Wrong. From the onset of Covid to Ukraine, our inflation problem was supply chain, mostly manufactured goods. Since Ukraine, it has shifted to energy.

Different elements of CPI have different weightings, which conceal the effect of energy in a crisis like this. In May the energy index within CPI... up 34.6% in May alone. In an event like this, the notion of excluding the high-volatility “core” is meaningless. Everything requires energy. The uppers and soles of your Nikes are fossil fuel. Food has its own Ukraine issue, but energy is the problem, from fuel to fertilizer.

Those Other Four Moments...

Now What. At Thanksgiving 2008 the credit markets (all markets) were rescued by Ben Bernanke’s genius, announcing quantitative easing -- buying enough MBS and Treasurys to unlock markets in which all had been afraid to buy.

Today... is it a coincidence that MBS have blown simultaneously with the Fed’s flip from QE buying to allowing runoff and threatening to sell? The weak break first. MBS are weird, and weird under stress is weak.

The Fed has had a plan, Powell becoming more concise each day: We will raise the cost of money until inflation comes under control. “It is our job to calibrate demand to supply.” A good, tidy, sorta mathematic way to proceed. But destruction of demand has limits, and this morning we hit one.

In today’s US, nobody is prepared to deal with inflation as it has developed in the last 90 days. Inflation can drop and even stabilize above the Fed’s target, but the world is only three months into finding alternate energy for Europe’s oil and gas imports from Russia. Including natural gas, something like 15% of the world’s energy supply has been dislocated.

Perhaps half will quickly be redirected. India and China are buying at a deep discount from Vladimir, which makes available much of the supply which those two used to buy elsewhere, Europe lining up. But Russian production is already suffering, a net and permanent loss. Alternate supplies require alternate delivery, gas especially tough -- absent pipelines, all gas deliveries are dependent on scarce LNG ships and terminals. Coal normal, $50-$100/ton... today $395.

In this circumstance, the Fed’s demand destruction has all the wisdom of Xi’s zero-covid. In a rational world, if the party in power in DC were not encumbered by climateers, we would turn on the hose, take every step to un-impede production and delivery. Instead of threatening to tax windfall profits, we would offer incentive price guarantees to protect producers from the energy price drop certain to lie ahead. This is an energy problem, not some amorphous inflation amoeba.

Below the 10-year T-note in the last twenty years. In 2018 there were a few days with trades above 3.20%, so in theory 10s have not broken that critical support. Theories like that tend to last a few days. The Fed has to decide how much destruction it has in mind. 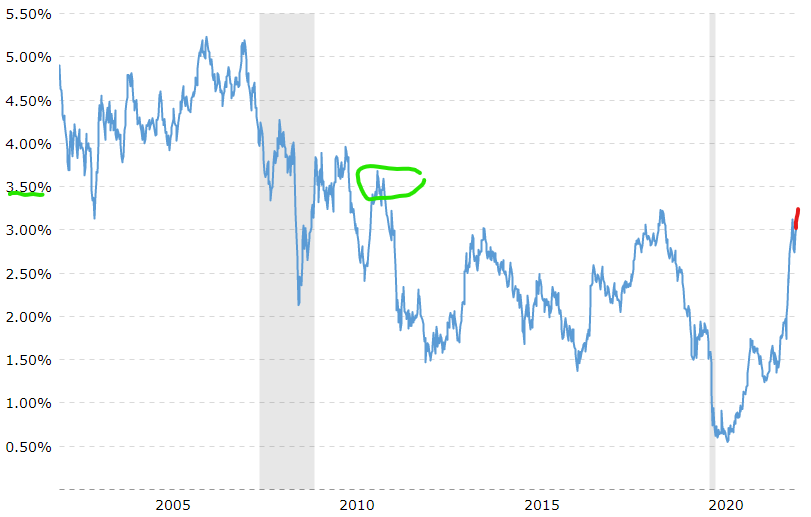 The 2-year T-note had been remarkably stable post-Ukraine, looking for the Fed to proceed quickly from today’s 1.00% to 2.75%. The chart is one year back, and at the moment cautious but unhinged: 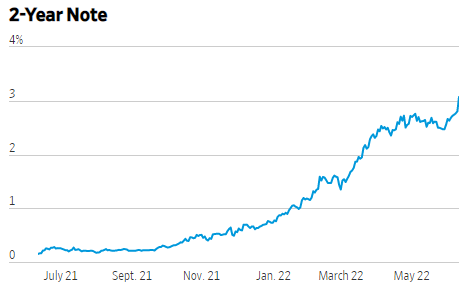 Coal... under pressure since mid-2021, quadruopled from normal since Ukraine: 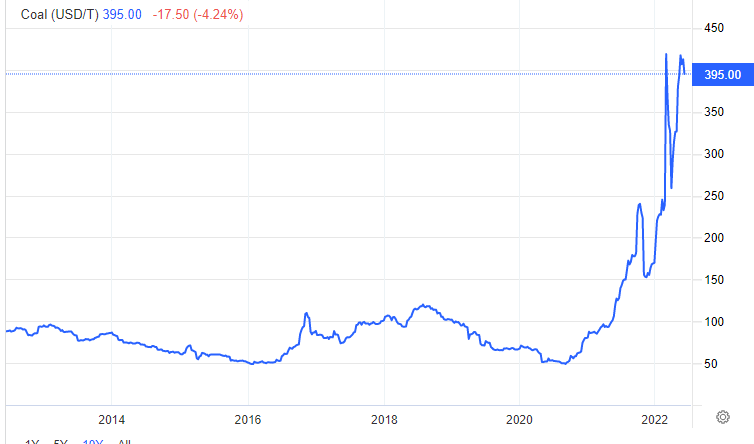 4 Ways to Generate Listings Leads in a Low-inventory Market